Today is a really big day for you – its Super Bowl Sunday! Your new ad for Soda Stream is going to be broadcast into millions of people’s homes! It must be so exciting for you!

I want to thank you. You and Stephen Harper (By the way, in case you didn’t know, he is the Prime Minister of Canada) have done what many of us have been trying to do but have been incapable of – you have started people seriously talking about the situation in Israel and Palestine!

When I heard that you had taken the job with SodaStream, I was reminded of a conversation with a restaurant owner in Capernaum. I had told him I was a human rights observer in Bethlehem. As I walked away he called me back and asked, “Sometimes we hear in the news that Palestinians have problems getting through the Checkpoints. Is that true?” I thought, “Holy Crap—! He really doesn’t know!” (Actually, I thought something else but I am a minister and I really shouldn’t use profanity.)

As it was for him – so it is for you. You appear to be blind to the reality of the majority of Palestinians. I suspect you have heard stories about the problems created for Palestinians by the longest occupation in the world but you dismissed them. Or maybe, you have just chosen to accept SodaStream’s version of the situation.

Ms. Johansson, I do not expect you to be overly knowledgeable about international law. But – it is not that complicated!

Israel is a signatory to the Geneva Conventions. Therein, it does not get to pick and choose what sections of the treaty it will and will not adhere to.

There are some who argue the ICJ erred in its ruling. That group is composed of the government of Israel, some lawyers and a whole whack of bloggers and pundits. I do not expect any of them have the credentials to be appointed to the ICJ. Nor is there any judicial body above the ICJ.

SodaStream employs a couple of hundred Palestinians and they are a bridge to peace. But the factory pays taxes to an illegal settlement and an illegal occupying power. The occupation only benefits Israel and is a major harm to the virtually all of the 4,000,000 resident Palestinians. Beyond that – it is illegal no matter what the government of Israel and the owners of SodaStream say.

The settlement that SodaStream is located in is one of the most heinous because it will probably be used to cut off the possibility of a contiguous Palestinian state.

The publicity you are offering them means that the longest occupation in the world will be strengthened.

So, I hope they are paying you incredibly well because you have effectively sold out almost 4,000,000 Palestinians so the bubbles may be free.

Ms. Johansson you are still a fine actor and you are still beautiful. You are also richer because of your support of SodaStream but I sincerely doubt you really needed the money.

You walked away from helping Oxfam a highly respected international NGO with a solid grasp of international issues. A group recognized for helping the poorest of the poor and making a real difference in the world.

The only value in what you have done is deepen and broaden the conversation about Israel’s illegal and immoral occupation of the West Bank. After all, it is an ill wind that blows no good.

Today is Groundhog Day. I suspect you must have seen your shadow because what you have done will only serve to lengthen the occupation. 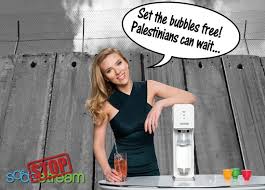