What Leads to a Hunger Strike?

I am worried for the 1,500 of 6,500 Palestinian prisoners held by Israelis who have been on a hunger strike for over a month. I am also worried about what might happen. 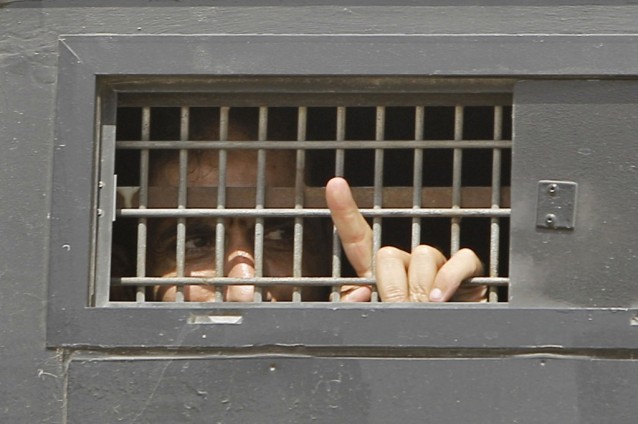 Palestinian prisoner in an Israeli jail.

I witnessed a sampling of how volatile the situation can be while I was an Ecumenical Accompanier. In Feb. 2013, Arafat Jaradat, a 30-year-old Palestinian father of two died in an Israeli prison; there were reports his death was caused by torture and inadequate medical attention. Protests broke out across Palestine. The Israeli military responded harshly and quickly. Tear gas swept across the West Bank, stun grenades and rubber bullets were used on protestors. After a few days, the protests calmed down but the story continued.

Unsurprisingly, the Israeli autopsy found Jaradat died of natural causes. But, a noted Turkish pathology expert, Dr. Sebnem Korur Fincanci, stated in her expert opinion, “the injuries on Jaradat’s body are indicative of “blunt trauma with a long and thick object” and are not consistent with resuscitation efforts. She also noted, beatings by blunt objects during detention is classified as “torture.” She concluded the cause of death was as a result of, “blunt trauma on the chest” resulting with “lung contusion” and “acute respiratory distress syndrome” (suffocation).”(i)

Just before my term ended, another disturbing event occurred in Hebron. The picture shows the scene described to me by a colleague; Israeli soldiers detained a group of seven boys all under the age of 12. Again, outrage filled the streets. Again, the Israeli military cracked down. 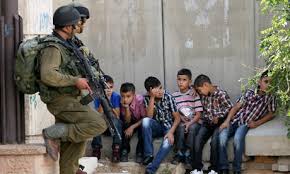 I still cannot imagine the fear in each of these little boys. Nor, can I fully imagine how the indelible mark left on each of them will play out in the future.

Last year, Defense for Children International – Palestine collected affidavits from 161 West Bank children detained by Israeli forces and prosecuted under Israeli military courts. 25 were held in solitary confinement for interrogation purposes for an average of 16 days, a 23% increase over the previous year. The longest documented period of isolation for a child in 2016 was 29 days. (ii) Currently, there are about 300 children held by the Israeli military.

Ever since leaving, I have asked myself, “What kind of government treats children like this?”

Marwon Barghouti, the hunger strike leader, writing in the New York Times, points out that amoung the 6,500 Palestinians currently imprisoned by Israel are some, “who hold the dubious distinction of holding world records for the longest period in detention of political prisoners.”(iii)

Hunger strikes are a desperate act by desperate people. They are an ancient, non-violent protest. Ghandi held several. The World Medical Association (WMA) Declaration of Malta on Hunger Strikes states, “(Hunger strikes) are often a form of protest by people who lack other ways of making their demands known. . . . Genuine and prolonged fasting risks death or permanent damage for hunger strikers.(iv)

The prisoner’s demands are simple. They are merely asking for rights guaranteed under international treaties; family visits, proper medical care, an end to Israel’s practice of detaining Palestinians without charge in so-called administrative detention and stopping the use of isolation.

Several NGO’s have documented Israel’s violations of the 4th Geneva Convention in its treatment of Palestinian prisoners. Amnesty International states, ”Israel’s decades-long policy of detaining Palestinians from the occupied West Bank and Gaza in prisons inside Israel and depriving them of regular family visits is not only cruel but also a blatant violation of international law.”(v)

1 Response to What Leads to a Hunger Strike?